It's been a busy week, so it's taken me a while to get around to posting this.

As I type this, Kelly and I are watching the local news weather coverage. Tonight is a tornado night in "Dixie Alley." We've already seen a tornado reported from Jasper, Alabama where our friend Bill lives. I hope we all survive this night unscathed.

My thoughts are with Bill as I post photos of fish caught from his home water on Smith Lake. I hope you are okay, my friend.

I had a difficult day... lots of tangles and challenges to deal with. The icing on the cake being when my 9' 7 wt G. Loomis GL3 fly rod with L.L. Bean Orion reel fell out of my kayak... and as it was disappearing into the depths of Alabama's deepest and clearest lake... I did what any reasonable fly fisher who can swim would do. I frantically jumped out of my little boat and went in after it. I was able to get it... so no loss... except for my dryness... I was wet for the rest of the afternoon.

Shortly after I took my swim, Kelly caught what may be the biggest Bluegill she has ever landed.


If Kelly's hand doesn't make it look big... here it is on her kayak paddle.


Kelly also caught this interesting little Bluegill that obviously had a close call with something dangerous... maybe an Osprey talon. 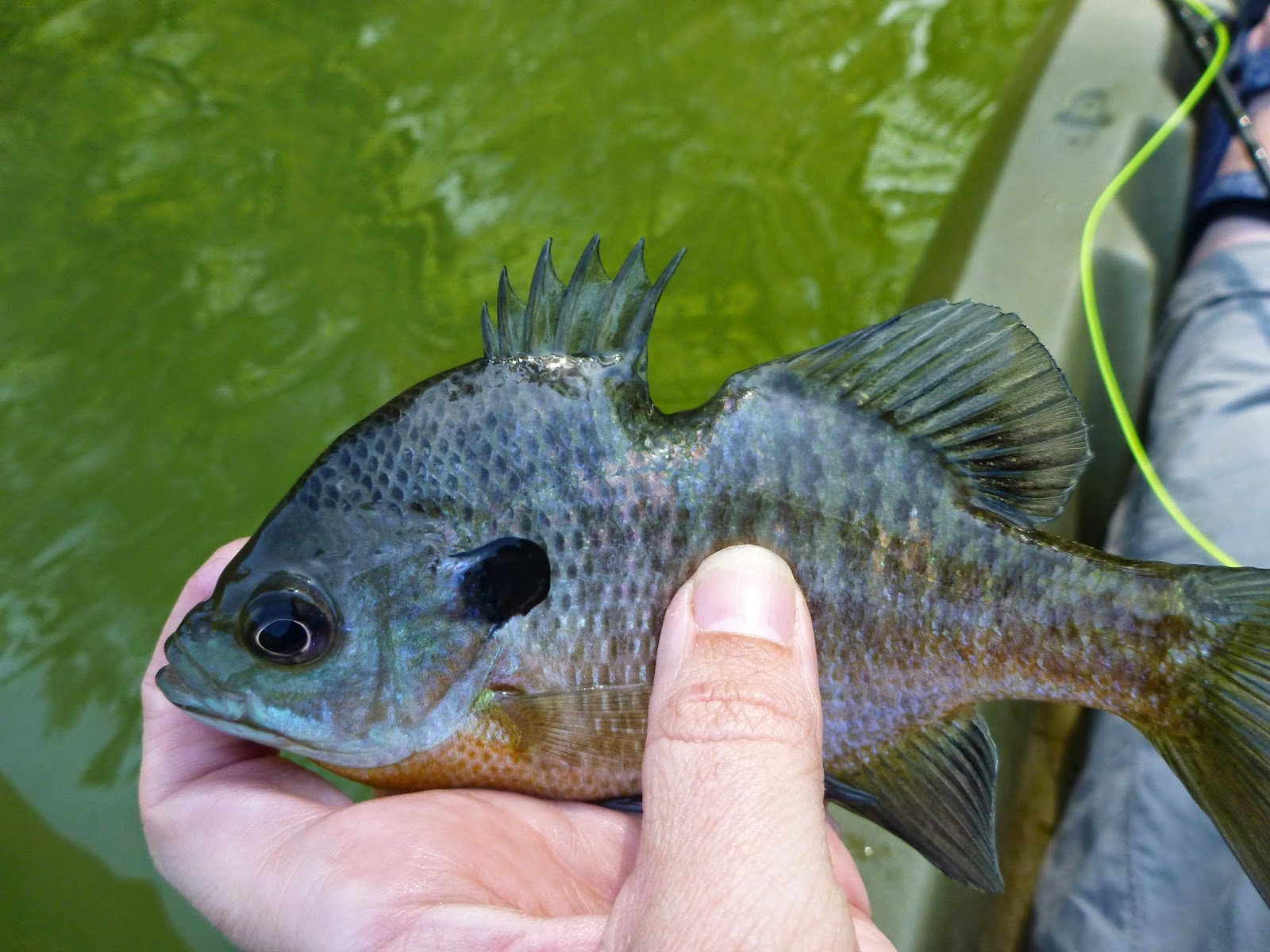 I only managed a few small bass- 2 on the baitcaster with Rapala X-Rap Shad and 1 on the fly rod. None were really photo worthy. As final insult to injury, I missed what may have been a very nice fish thanks to a very untimely decision to sit my rod down in favor of my paddle... all to make some minor and unnecessary adjustment to my kayak's position. The fish, which I estimated to be in the 5 lb size class, inhaled my fly and spit it before I could pick the rod back up and set the hook. Damn it.

I may have been outfished by a girl again, but at least I can say I tied the flies responsible for her success.


You gotta claim your victories wherever you find them.
Posted by Jay at 7:35 PM 27 comments


There's a small creek that flows out of the state park where I work and through the suburban area where we now live. A short section of it flows along the edge of our neighborhood subdivision, although our house isn't really that close to it... which is probably a really good thing... given what occurred earlier this week.

We are very fortunate that our house wasn't flooded, because there were several homes in our neighborhood (close to the creek) that were.

Here are a few pictures of the raging creek...


The was the first Redeye Bass that Kelly caught from our new neighborhood creek in late February... 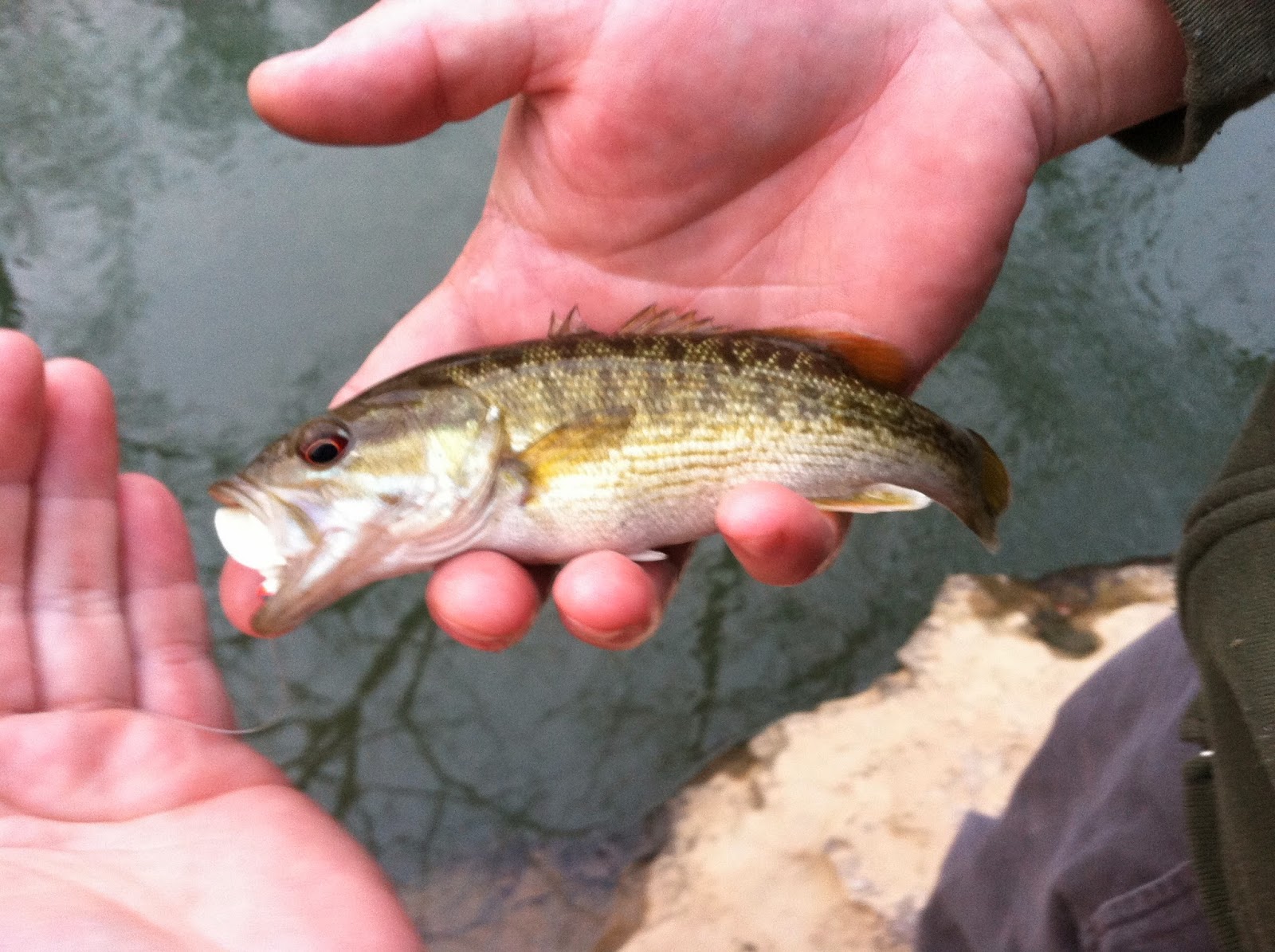 and this was the second...


If you know anything about Redeyes, you know that this is actually a "big" one... especially from such a small (under normal circumstances) creek. The Alabama state (and presumably World) record is just a little over 3 lbs.

I really hope the recent flood didn't wash away any of the Redeyes in the 'hood. They're not a species that is particularly fond of siltation and/or dirty water... so I'm also hopeful that we won't have any more unusually heavy rainfall in the coming days.

I'm sure the Redeyes are still there... they're tough little fish after all, but this wasn't good for the habitat or the fish.
Posted by Jay at 3:48 PM 12 comments

I learned about Braden Smith thanks to a post by Morgan Kupfer of the Tight Lined Tales of a Fly Fisherman blog.

Morgan posted a little over two weeks ago about a fellow fly fisherman in need.

I decided to do what I could to help a member of the brotherhood... even though I didn't know him, and he didn't know me.

I reached out to Braden in an e-mail... and the only thing I could think to put in the subject line that made any sense was "Fly fishing brotherhood."

One of things on Braden's list of items lost was a 9' 7 wt rod. I told him that he must be a kindred spirit if he fishes a 7 wt... which has become a less and less popular rod and line weight in recent years. It's still my favorite rod weight for most of my bass fishing... but Braden primarily targets a different species with his 7 wt... a fish not found in the southeast.

In addition to a few basic fly tying materials, I sent Braden a 9' 7 wt rod that we had retired from regular use. It was the rod that Kelly used the most before I got her one she could call her very own. In our house this rod was affectionately known as the "Thunderstick." It had no catchy model name... just some letters and numbers that were a mouthful... not simple or cool like GL3. It was an IM6 graphite rod (with decent quality hardware) branded for and sold by Sportsman's Warehouse. I think it may have been made by Cortland, but can't be sure of that, and don't remember how I came to that conclusion.

The rod was in good fishable condition, but had lots of wear and tear. It had caught many fish on waters around the southeast before it made its way to Braden in western New York. This rod has history.

I had two minor requests of Braden if he was to accept this rod...
He is a man of his word.