Those of you who have followed The Naturalist's Angle for a while may remember the Legend of the Christmas Crawdad- the saga of the fly that I have used for Christmas Day trout fishing for the last four years.

In 2013, the Christmas Crawdad has become truly legendary.

I present to you the greatest accomplishment of the Christmas Crawdad to date... and one that is likely to never be surpassed...

This fish is my new personal best Rainbow Trout (Oncorhynchus mykiss) by about three or four pounds. I'm not exactly sure, but I think it was in the neighborhood of 8 lbs... quickly landed, photographed, and returned to the river. We didn't want to stress her out by taking too many pics or measurements. A fish that big deserves a little respect.

Unfortunately, we left our proper fishing camera at home and didn't realize it until we were about half way to the river... so the only record of my biggest trout ever are a few crappy cell phone pics. However, if we had the proper camera, I'm sure I would have never landed this fish on 5X tippet using a ridiculous fly crafted from holiday decorations.

In addition to this "UN believable" trout (as Bill Trussell of "Fishing Through Life" responded to a picture text I sent him that said "Merry Christmas from AR!"), we also caught a few other fishes.

Kelly landed this cute little toothy critter that we thought might have been a Muskie (Esox masquinongy) at first, but it turns out it's a Grass Pickerel (E. americanus). There are Muskie in the Spring River, but there are also Pickerel in the impoundment formed by the dam at Mammoth Springs. I'm going to guess this little guy got washed over the wall in a recent high water event. 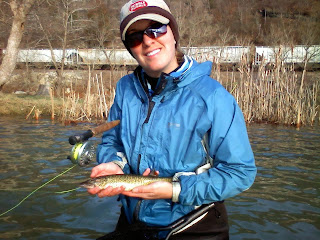 Kelly also established a new personal best on this trip... which is not nearly as impressive as my new personal best if I do say so... but an accomplishment nonetheless. (I know I'm gonna eat those words when bass fishing season gets underway.) 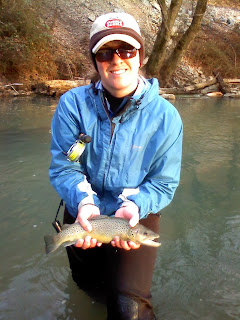 Kelly and Brown Trout have had a mysterious relationship. She just can't seem to find them. She briefly hooked and lost a nicer one in the Chattahoochee River in Georgia a little over two years ago, but her encounters with Browns prior to this have been... how should I say it?... a whole lot cuter.

Like last year, we counted raptors as we drove the highway from Memphis to the Spring River. We didn't see as many Northern Harriers as last year, and only one Bald Eagle this year, but we did record 66 Red-tailed Hawks. Last year we didn't keep up with the exact number of Redtails, but there definitely weren't as many as this year. Needless to say, eastern Arkansas along the Mississippi flyway is a great place for winter hawk watching... even at 70 mph through the windows of a car.

Except for the minor inconvenience of a forgotten camera, we (I) really couldn't have had a better day of fishing for Christmas this year. I hope everyone out there has enjoyed a wonderful holiday season thus far, and I wish you all tight lines and bent rods for 2014.
Posted by Jay at 12:31 PM 16 comments

Email ThisBlogThis!Share to TwitterShare to FacebookShare to Pinterest
Labels: flies, Legend of the Christmas Crawdad, other fish, trout

DIY: How a fisherman organizes pots and pans

It's been quite a while since I've posted anything here. I've been a pretty awful blogger lately. I made the Troutrageous! Blogroll Quarantine - Winter 2013... a very dubious honor if I do say so myself.

I won't spend too much time making excuses, but life has been really busy over the last five months since I last posted.

First, Kelly finished up her final affairs as a graduate student in biology at UAB... and then the challenge of finding gainful employment began. After a lot of unfruitful searching, long application processes, and time wasted in interviews, Kelly finally found a job as a high school biology teacher just as the school year began... and things have been falling into place ever since.

Second, we started the search for a new place to live (after Kelly got her job)... which was long overdue. We had been cramped in our tiny 640 sq ft (yes, you read that right) apartment for far too long. We found a house we really wanted, and things finally went our way for once. I'm happy to announce that we now live in a house that's nearly 2,000 sq ft with a two car garage... that's more than three times the size of our previous living space... but it feels even bigger. To us it feels like a mansion. We finally emptied out our storage unit and now we have room to spread out a bit, including plenty of storage space for all of our outdoor gear. I also have a place in the garage for a workshop although it's not completely set up yet. I did build a workbench as soon as we got the keys to the house, but it's still a disorganized mess. We moved in during the week of Thanksgiving, so it's all very new.

One of the first orders of business in getting the kitchen somewhat settled was to hang our one-of-a-kind pot rack. This is the third incarnation of this rack in the third home in which it has been installed. Each installation has been slightly different, but I think this is the one that best fits our household... and I think most of you would probably agree. 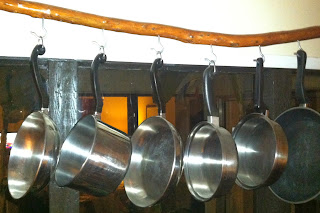 The stick that forms the base of the rack is a piece of cypress that was collected near Reelfoot Lake in northwest Tennessee after a historic ice storm hit in January 2009. I don't often get sentimental about sticks, but this one was special. It is a souvenir from Kelly's first time to see wild Bald Eagles as well as finding a brave Cottonmouth out basking just days after the major winter weather event. The cypress stick was found very close to where the Cottonmouth was sitting. I admit... I almost stepped on it. I was looking up for eagles when Kelly spotted it. She's never really let me live that one down... despite being one of several "Kelly spotted the snake before Jay" moments.


The first installation of the rack made use of two hitching rings that my mom picked up at a yard sale and gave to me. I remember her saying something to the effect of, "I thought you could find a creative way to use these"... and sure enough, I did. That installation was in our house in Memphis, and the rings were left behind with a new version of the stick pot rack to replace the original... so maybe it's not "one-of-a-kind" after all. The replacement was a stick from the backyard willow oak with bark left intact. I think the original cypress version minus the bark is prettier. By the way, the cypress is only clear coated- no stain needed to get that rich red color.

The second installation, in our Birmingham apartment which had 10 ft ceilings, employed two shelf brackets with rod hooks on the end attached to a wall. It was functional, but not all that aesthetically pleasing.

This final installation is definitely the most unique... and my favorite hands down. 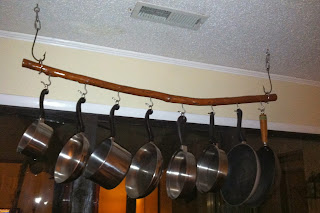 The two hooks are antiques, stamped "PFLUEGER AKRON, O." on the shank, probably salesman's samples, who knows how old, somewhere on the order of a size 11/0. They are sharp, and I would say highly functional. I sincerely hope that no serial killers ever get into our house... as I'm sure these hooks would play into that somehow. This was my only hesitation in hanging them from the ceiling... I've obviously been watching too much "Dexter" on Netflix lately.

I didn't actually think I would ever use the hooks for any fishing... and certainly not any fly tying. I figured since they are antiques this would a good way to display them and simultaneously put them to use. This pair of hooks was among the many items that were part of the fishing "bonanza" (as my friend Don called it) that came from Nancy's late father Tom Wellborn... the gift that keeps on giving.


We haven't done a whole lot of fishing lately, and most of it has been ultralight spin fishing in the neighborhood creek. I wish I could post a few more recent fishing photos, but our usual fishing camera has been misplaced (but hopefully not lost forever) in the chaos of moving. Here's one of Kelly from Thanksgiving Day... after all this wouldn't be much of a fishing blog without fish pics.


We do plan to make our annual Christmas Day trout fishing trip, so wish us luck.
Posted by Jay at 9:28 PM 4 comments