I'm sure some of you who read the title of this post are wondering...

what in the heck is a River Redhorse?

Well... it's not quite a carp, but among our native fishes it's pretty similar... and since it's native, I think it's that much sweeter... an excellent consolation prize for a failed attempt at fly carping. I also think it's prettier than your average carp, but that's just my opinion.


The IGFA All-Tackle Record for this species of fish is only 9 lbs... so at around 4 lbs this is a pretty hefty specimen. The Redhorse was caught on a brown stonefly nymph, size 8, that I cannot take credit for tying... as a matter of fact I can't remember when or where I acquired that fly. All I know is that it was in my fly box, and it caught this fish. 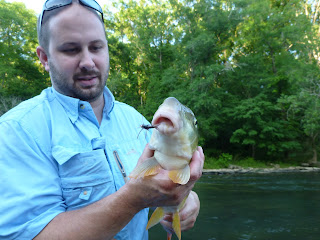 I also saw a handful of small Smallmouth Buffalo (Ictiobus bubalus) in addition to a few other Redhorse of similar size to the one above, but I only caught a glimpse of a single truly behemoth Common Carp... I never even got a chance for a cast. I would estimate it to have been over 3 feet in length and easily 25 lbs... probably closer to 35. It saw me before I saw it due to the intense glare from the riffles, and it bolted upstream like a freight train... reminiscent of a scene from Jaws... with it's dorsal fin and "shoulders" literally sticking above the shallow 8 inches of water running over the rocks. It ran up the entire series of rapids and riffles without slowing down or stopping, a distance of literally 100 feet or more, before it disappeared into the deep pool above the swift shallow section.

I think the carp in the Cahaba River National Wildlife Refuge are extra spooky thanks to the bow fishers. Kelly and I have seen them a few times now, and the big carp are what they're after... and I think the big carp have learned this. Kelly also had a similar experience with a large carp "running" away from her upstream on the same outing.

This is not the first Redhorse that has made an appearance here on The Naturalist's Angle. On both Christmas Day 2010 and Christmas Day 2012, I caught a Golden Redhorse (M. erythrurum)... I guess it's sort of becoming a holiday tradition. If you want to see more Redhorses and other interesting roughfish species, check out Moxostoma.com.
Posted by Jay at 8:46 PM 21 comments