One of the things that really got me going in fly tying was the prospect of making my own cork poppers. Prior to discovering the magic of BoogleBugs about three years ago, I had been sorely disappointed with most of the poppers I had ever purchased and used. The hooks were almost always too small or so poorly placed in the cork body that the functional gap of the hook was diminished. You can still find a lot of these dysfunctional poppers out there. I won't name names, but let's just say they can be found at Bass Pro and Walmart among other retailers.

I began making my own poppers quite a while before I found my first BoogleBug... and then the desire to make my own pretty much faded away. I had finally found a well made, high quality cork popper that I couldn't easily replicate at home. I know my simple cork poppers pale in comparison to a BoogleBug, but they're not nearly as expensive- perhaps their only redeeming quality. By the way, be sure to check out the reports page on the BoogleBug website, you might see a familiar face.


A little over six years ago, I bought a series of DVDs on Ebay by a fly fishing guide named Chris Hansen (not to be confused with the Chris Hansen who catches an entirely different kind of predator). He's not a big name in fly fishing (and he may not even be a guide anymore for all I know- his website appears frozen in 2005), but he does a pretty good job of showing you how to catch bass on a fly rod in his videos. I can't say I learned much about fishing techniques from Chris, but I really did enjoy watching his videos. I bought them primarily for entertainment after all. Interestingly, all of these DVDs are labeled "Volume 1"... but I wouldn't hold my breath waiting for a "Volume 2" for any of them. 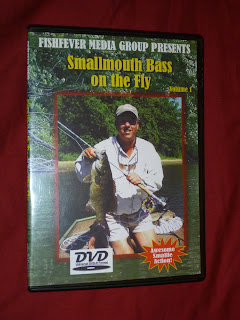 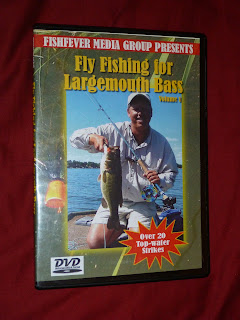 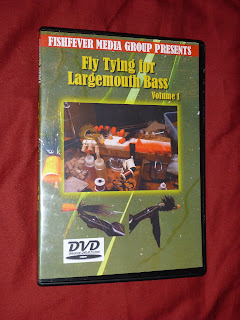 Most of my fly tying prior to the purchase of these DVDs was limited to woolly buggers, zebra midges, and other really basic patterns... so I admittedly learned a few things about making cork poppers from watching Hansen's tying video. The poppers he makes in his video (and my version of them) are very simple. I would call them "old school." It's actually been quite a while since I watched the DVD, but I still remember the basics of what I learned. 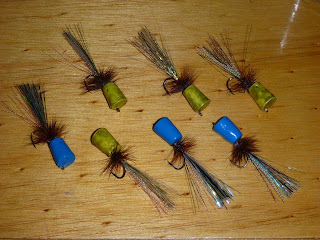 I've had these seven smaller corks glued to hooks sitting in a box waiting to be finished for probably five years now. I figured it was about time to finish 'em and put 'em to use. The green ones were painted so long ago, I can't remember what I used to paint them. The blue ones were painted in the past few weeks with two coats of Sally Hansen's Hard as Nails Xtreme Wear in "Blue Me Away!" color and then finished with a couple more coats of the same brand of "Invisible" clear coat. Even though I bought this nail polish specifically for finishing some poppers, Kelly just couldn't resist. 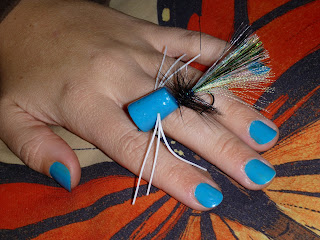 There a lot of guys out there who make some real popper works of art. Jeff of J & M Flies and the blog "Fly Fishing & Tying Obsessed" comes to mind. These simple old-fashioned cork poppers may not be nearly as pretty as Jeff's, but don't forget that "old school" still catches fish.
Posted by Jay at 10:41 AM