Last Sunday, I got the chance for a little reunion with an old friend from Knoxville. It's almost hard to believe how long it had been since we hung out the last time, and we didn't even go fishing or looking for reptiles- two of our favorite pastimes. We ate at the Country Table Restaurant in Knoxville. It was a classy joint as you can tell from the photograph of that day over seven years ago. It appears the restaurant has closed down and is now for sale. Stephen Jones is a really good guy, and, as it turns out, he's become one heck of a fly fisherman in those seven years since I had last seen him. I'm proud to say that Stephen gives me at least a little bit of credit for sparking his interest in fly fishing. Apparently there's another guy that shares the credit as well. I've never met him, but he must be a pretty good fellow too.


We spent our reunion day on the Hiwassee River in east Tennessee. It's a place I had fished only a few times before, and I will admit... it still has my number. For whatever reason, I just haven't had much luck there. Stephen had no trouble though. He put on a clinic for high stick nymphing and probably landed thirty fish or more throughout the day. He caught more than a dozen before Kelly and I even made it to the river. His drive was just a bit shorter than ours, and we got distracted by some birds flying overhead on the way there.

Kelly caught more fish than I did as usual (I think the count was like 10 – 2), and she finally caught another Brown Trout that was at least slightly bigger than her first. Despite our best efforts, none of us caught anything spectacular, but of course that's not always the point.


Besides catching a few fish, part of our goal for the day was to field test a couple of new items from SmithFly and finish testing out our Redington Sonic-Pro Zip Front waders. We were pretty successful on all fronts, and the reviews will be soon forthcoming. Stay tuned for those.

The birds that were flying overhead were cranes- mostly Sandhill Cranes (Grus canadensis). We've seen Sandhills before. We even saw a nesting pair when we visited the Upper Peninsula of Michigan. Whooping Cranes (G. americana) on the other hand, were something new and exciting. We were pleasantly surprised to spot a pair flying in formation with the Sandhills.

Unfortunately, we don't have any concrete photographic evidence to support our claim, but we did get a few pics of the cranes in flight. In the second photo, the sixth and eighth birds from the left look like they could be Whoopers, but I won't claim that they are. I'll let you examine and decide for yourselves. The two possible Whoopers in the pic are not the pair we saw. We weren't able to get a pic of that group before they disappeared behind the treeline. 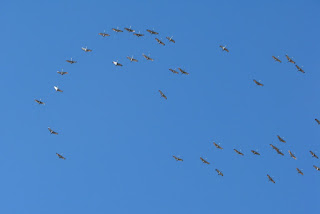 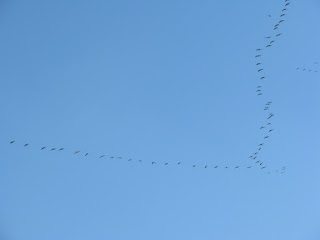 I'm satisfied knowing that Kelly and I got the chance to see a true rarity, living free in the wild- proof that endangered species can be saved. Today there are only about 600 Whooping Cranes in the wild. In the 1940s the population dwindled down to just 21 birds. The recovery of the Whooping Crane is a true conservation success story.


The Whooping Cranes that now migrate through east Tennessee are graduates of a program that uses aircraft-led migration to lead young birds from summer breeding habitat in Wisconsin to an overwintering site in Florida. The program continues to reintroduce more captive bred birds each year to supplement the wild population. Whooping Cranes are still listed as "endangered," but they're on a steady road to full recovery.

It now appears that the older Whoopers are migrating naturally along with their Sandhill congeners...

It's in her DNA

Kelly and I made an unplanned visit to her grandparent's house on Monday evening. To make a long story short, we stopped by to check on them because Kelly's mother (who doesn't live in the area) was having a difficult time locating her father. It turns out he was just fine. He just wasn't answering his cell phone. I don't really blame him.

I can honestly say we don't visit Kelly's grandparents as often as we probably should, even though we live in the same metropolitan area. I know it will sound like an excuse, but by the time we get home from work and school the old folks are already preparing for bed. Our weekends are often so busy that we don't have a lot of free time there either, and what little we do is often spent fishing. We are planning to go and do the annual fall gutter clean out very soon (to ensure Kelly's grandfather doesn't try to get on the roof and do it by himself). It seems like we might also be installing more guttering while we're there, so next year's gutter cleaning will be that much more fun.

As visits with our senior family members often go, we ended up sitting around the kitchen table and listening to Kelly's grandparents tell us what they've been up to lately as well as recount stories from their youth and the second World War. Having lost the last of my grandparents in 2007, it's one of those things that I miss... but never knew that I would. I'm glad that I can now enjoy Kelly sharing her grandparents with me.

Among the many stories we heard about gardening and days gone by was an unexpected fishing tale. This was a surprise because Kelly's maternal grandfather isn't really an outdoorsman. The story went something like this...

Kelly's Grandfather, Lucius or "Lutz" as he is called by his family, went fishing once with his father-in-law (Kelly's great grandfather) in south Louisiana. There were apparently some secret ponds that had a bunch of "green trout" (which Kelly and I interpreted to be Largemouth Bass) in them. The two men went fishing on one of the ponds in a skiff, and Kelly's great grandfather handed Lutz a fly rod. He said "I don't know how to use a fly rod," but his father-in-law told him he would figure it out. He began trying to cast as they crossed the pond and approached a stand of lily pads. Kelly's grandfather told us he couldn't have done it again if he tried, but once the boat stopped his first cast landed perfectly among the lily pads.

Instantly a big bass erupted from the water and swallowed the fly. Lutz had no experience setting the hook or playing a fish with a fly rod, but somehow he managed to reel in the fish. He demonstrated for us with his hands the size of the fish which appeared to be about fifteen or sixteen inches. After the fish was landed, Kelly's great grandfather began to turn the skiff around, leaving the lily pads, and headed back for where they put in. A confused Lutz asked what he was doing, and he simply said "you caught my fish, we're going home." Lutz suspected there were more fish lurking under the lily pads, but he wouldn't find out that day. The frustrated father-in-law wasn't going to give his son-in-law any further opportunity to show him up.

Although I can certainly take credit for being the first person to put a fly rod in Kelly's adult hands (her dad let her play with a fly rod as a child), her DNA is no stranger to the long rod. We already knew Kelly's dad had spent a lot of time chasing bass with a fly rod in his younger days, but this is the first either of us had heard of any fly fishers on the maternal side of her family.

Email ThisBlogThis!Share to TwitterShare to FacebookShare to Pinterest
Labels: Birmingham, family, life, outfished by a girl

The blazing oranges of the maples. 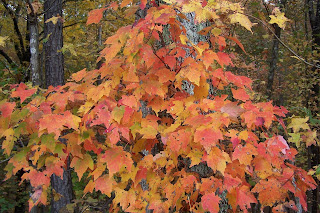 The brilliant golds of the tulip poplars and beeches. 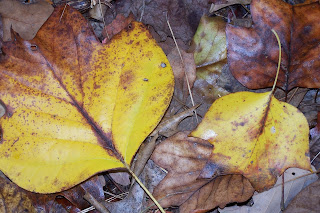 The deep reds of the dogwoods. 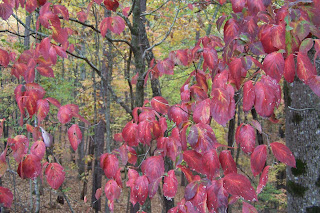 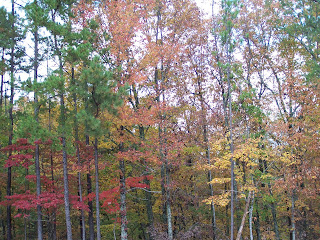 especially when juxtaposed among the evergreen pines and cedars... 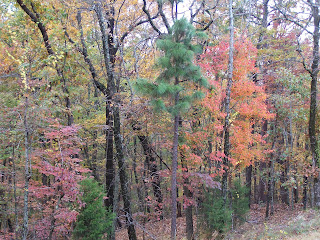 but it certainly creates a beautiful landscape. 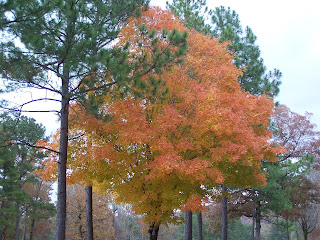 During the past week, Oak Mountain State Park (where I am grateful to be able to go to work every day) has become a palette of autumn splendor. Today's overcast skies and my "point and shoot" don't nearly do it justice, but hopefully you get the idea.

This post title was borrowed from a poetry post entitled "Subtlety" from the blog "Mike's Gone Fishin'... Again" by Mike Sepelak. I highly recommend you read Mike's poem for a more introspective examination of autumn's colors.
Posted by Jay at 4:00 PM 6 comments