Was the fish caught using an illegal method... like dynamite?

Or some sort of "banned lure"?

No... and no. (At least not at the time of this writing, but there is some speculation that the fish was not actually caught in the manner described by Mr. Crowder.)

It seems Mr. Crowder failed to follow the most basic of "the rules." You see, in order to go out and catch a fish in Arkansas (or pretty much any other state), on land that you don't own, especially public land such as a state park, you generally will need a fishing license to make your catch legal. 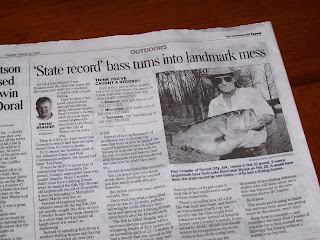 You can read the above article from our local newspaper online. There's also a good article on the Field & Stream website.

Mr. Crowder's fish story may be the best cautionary tale that could ever be told about why you shouldn't try to fish without a license.

Email ThisBlogThis!Share to TwitterShare to FacebookShare to Pinterest
Labels: bass

Missed chance at a record breaker

Who would have guessed we just missed a chance at the new Arkansas state record Largemouth Bass?

Two days after Kelly and I fished at the very unassuming looking Lake Dunn in Village Creek State Park on Sunday, a guy who was apparently just as interested in catching catfish lands a new state record Largemouth.

Some guys have all the luck.

Read all about it at bassmaster.com.

If you look real close at the picture of Mr. Crowder holding up his trophy, I'm pretty certain the tree with the light colored bark that appears just above the fish's tail is the same tree near the boat ramp that appears just to the left of my head in the photo below. 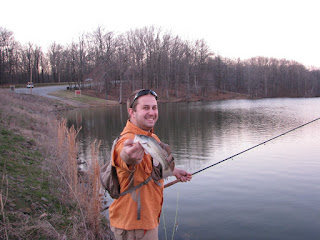 That little one in my hand apparently has more potential than I would have ever guessed.
Posted by Jay at 11:09 PM 5 comments

Email ThisBlogThis!Share to TwitterShare to FacebookShare to Pinterest
Labels: bass

I just got home from a members night preview of the IMAX film "Tornado Alley" at the Pink Palace Museum (our local Memphis natural and cultural history museum with the funny name). My sister invited me to tag along with her family, and it's pretty hard for me to pass up a free movie ticket... especially when the movie is of particular interest to me.

I had no idea we would be graced by the presence of the filmmaker and storm chaser extraordinaire Sean Casey. The man is a badass. He was on hand to introduce the film and give a little background on how the film was made... and of course talk a bit about the TIV that he designed and built. That's Tornado Intercept Vehicle for the uninitiated. I also had no idea that TIV 2 would be parked at the front entrance of the museum to welcome us to the show.


I apologize for the low quality photo. I took it with my work phone- a crappy Blackberry. I just felt the need to validate my claim. That vehicle is a bit of a celebrity. It's pretty much the star of the film.

The film was pretty cool and showed a lot of pretty amazing footage. I thoroughly enjoyed it, but I'm just a bit fascinated by tornadoes. Tornado season has gotten an early start in 2012, and living in "Dixie Alley" can be pretty scary at this time of year. I admit my fascination with tornadoes is about 40% fear, about 40% in awe of their power, about 10% interest in the science, and 10% other (the TIV, cool old sirens, the movie "Twister", etc.).

Hopefully we won't have too many sleepless tornado nights in the coming days. I'll have my supply of chips just in case we do.
Posted by Jay at 8:15 PM 6 comments