The real deal and plague makers

Kelly did some computer geek work and was able to salvage all that was on the hard drive of the dead laptop. So, as promised... I present the real deal and plague makers.
﻿
﻿

I think my drawing was pretty close, but you can decide for yourself... 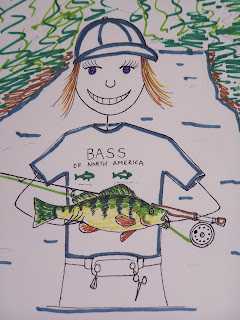 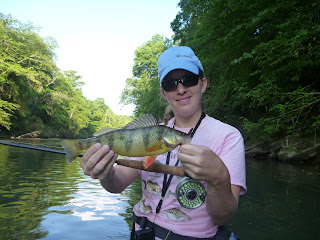 I also wanted to show the Rock Bass that I caught on the Bunny Butt Slider. 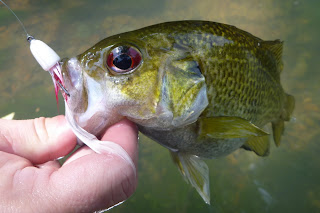 Kelly and I will be fishing on Memorial Day at one of our favorite outdoor places.

I hope everyone enjoys their holiday weekend. While you're enjoying it, be sure to take a moment to remember the men and women who have served and are currently serving our country.

If it wasn't for them, we wouldn't be able to enjoy three day weekends or favorite outdoor places.
Posted by Jay at 5:43 PM 11 comments

Email ThisBlogThis!Share to TwitterShare to FacebookShare to Pinterest
Labels: entomology, flies, insects, nature, other fish, outfished by a girl

Doomsday fishing, a plague of "locusts," and a dead laptop

As most of you are probably aware... the rapture didn't happen as predicted.

I can't say that I was worried much about it, but when Kelly and I arrived at Cypress Creek on Saturday there was a sign of the apocalypse straight out of the book of Revelation (Chapter 9). A plague of "locusts" greeted us at our chosen fishing destination.

It wasn't exactly a plague of Biblical proportions, but we did see our fair share of "locusts." Well, not really locusts, but cicadas. Even though they bear no resemblance to true locusts, cicadas are often called "locusts" by people who just don't know any better. All day long we were surrounded by the drone of Periodical Cicadas (Magicicada tredecim) from "The Great Southern Brood" (also known as "Brood XIX"). I think we were actually just catching the tail end of the mass emergence, because there were already a ton of cicada wings on the ground... evidence of cicadas that had been eaten by birds.

Since the cicadas were about in mass numbers (and frequently falling into the water), I decided to give this pattern a try...


I had high hopes it might tempt a selective Smallmouth to the surface, but all I managed to catch with it was a single Rock Bass (Ambloplites rupestris). There were a lot of smaller sunfish that were interested, but the size 2 hook was just too big for them.

I had a lot more luck with the Bunny Butt Slider, landing several more Rock Bass and a large Redbreast Sunfish (Lepomis auritus)... but unfortunately I don't have any photos to prove it. Somebody (me) forgot to put the memory card in the camera, so we were only able to take a handful of pictures... but that's not the reason I don't have any photos to show at the moment. Our laptop decided to die on us Sunday afternoon, and when somebody (Kelly) downloaded the photos from the camera they decided to delete them from the camera's internal memory. Our doomsday fishing trip pictures now exist only on the desktop of a dead computer. I really hope we can retrieve them... and all of the other files saved to the hard drive.

One of those pictures was of Kelly's catch of the day. As is usually the case, Kelly caught more fish than I did. I think the score was like 30 to 6, but who's counting? I never even got a look from a decent fish, but Kelly watched a quality Smallie grab the tail (but unfortunately not the hook) of her giant Woolly Bugger. As annoying as it was to have been thoroughly outfished by a girl again, Kelly decided to really show me up by catching a nice Yellow Perch (Perca flavescens) toward the end of the day. I've never even caught a Yellow Perch on the fly, so I admit I was a bit jealous... but as always, very proud of Kelly. She further salted the wound when she immediately caught a second one. Due to our limited photo storage capacity, we only took a picture of the first one. It looked something like this....


Maybe one day I'll get to share the real photo, along with a nice one Kelly took of a mating pair of cicadas... hard at work creating the next generation of apocalyptic plague.

Email ThisBlogThis!Share to TwitterShare to FacebookShare to Pinterest
Labels: entomology, flies, insects, nature, other fish, outfished by a girl, sunfish

Went to the craft store this weekend and picked up some of these...


because I've been wanting to make a few of these... 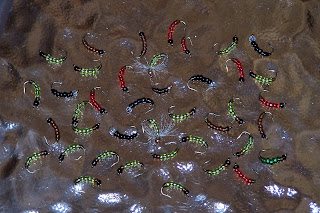 I've never tried making (hard to call it "tying") any bead body flies before, but I'm pretty satisfied with the results of my first attempt. They're super simple, and if they actually catch any fish they'll be well worth the effort... which was minimal.

They tying is simply enough wraps of thread (behind the last bead) to keep the beads from sliding off and a couple of whip finishes. I cemented the thread wraps for durability. Most of what I "tied" are on size 12 scud hooks, but there are a couple size 16 in the mix. I think the size 16 are actually a bit too small for the beads. I found out the hard way that I'm currently out of size 14 hooks, but I think they would work pretty well.

I bought the lime green and red, but the rest of the colors I used were leftover from my mother's heyday of making beaded jewelry several years ago. She let me raid her supply and fill a couple boxes with colors that I thought would be useful.


I'm not really sure what in nature (if anything) some of these little gems might represent... other than maybe some larger Chironomids. I would consider most of them to be attractor patterns. I did make the lime green with the brown/black heads with the intention of imitating caddis pupae. I also tied a couple with Hungarian partridge soft hackle and a copper bead head. They're slightly more complicated than the all seed bead version, but they might still be simpler than Midgeman's "very simple little BH soft hackle caddis." I had no idea that he would be posting that right before I posted this... and I certainly have no desire to steal his thunder or compete with his impressive ties... but these seed bead flies really are simple.

Now I just need to get out and see what the trout think.
Posted by Jay at 11:07 PM 20 comments

The title of this post could be a bit misleading for some readers who might stumble upon it.

Beale Street is world famous for blues music, and there's always some bass of the musical sort emanating from the establishments on Beale, but bass of the piscine variety... well, that's another matter.

So, are there bass (with fins and gills) swimming on Beale Street?

Probably not... but at the moment... it is possible. A tiny little bit of Beale is underwater after all.


Just in case you've been living under a rock for the past few days, or maybe just getting out and fishing more than I have, the Mississippi River is more than 13' above flood stage at Memphis today. It will come close to the record flood level of 1937 when it crests in the next 48 to 72 hours. I think most of the national news broadcasts will be brought to you from the big "M" tomorrow.

On the other side of the railing in the photo above lies Tom Lee Park, but you can't see it because it's underwater. This park is home to the major events of the Memphis in May International Festival including Beale Street Music Festival and the World Championship Barbecue Cooking Contest. Music Fest escaped the wrath of the big river last weekend, but the BBQ event (May 12-14) has been relocated for the first time in its 33 year history.

Despite the impression that the news media might be giving the country, downtown Memphis is not flooded. There are many homes, churches, schools, and businesses that have been hit hard, but the majority of the city sits well above the mighty Mississippi. Although there is a fair amount of localized flooding around the city, the hardest hit places are mostly in outlying areas well outside of Memphis. I don't mean to minimize the seriousness of this event, but the actual number of people affected by the flood is rather small for a metropolitan area of well over one million people.

On a more positive note, my Memphis Grizzlies finally decided that winning NBA playoff games was a good thing...

There's a lot going on in Memphis right now, but unfortunately no fishing for me... unless the bass start biting on Beale Street.
Posted by Jay at 11:00 PM 14 comments

I know most of us don't have the privilege of living on the rivers where we fish, so we may not always be aware of all that goes on in the way of insect life. I stumbled upon an easy way to survey stream insects without ever turning a single rock at the water's edge.

If you want a crash course in the entomology of a particular stream it may be as simple as making a nocturnal pit stop in a lighted outhouse near the water.

Kelly and I made a trip to the Spring River in Arkansas during Easter weekend. It was a brief, but good trip. We caught lots of fish... Kelly more than I... as usual. We had the river pretty much to ourselves. The bad weather in the area kept the people away I suppose... or maybe they just weren't as foolish as us to be out there. We fished under looming storm clouds with lightning ever present in the distance. We also fished straight through a few brief showers.

On Friday night after we set up our tent, we made our rounds to the campground bathhouse (really just a glorified outhouse). As we took care of our business, we were literally surrounded by a host of stream dwelling insects. We pretty much got to see the full diversity of what's on the menu for the fish. We made a few pretty cool discoveries, and I even saw a few that I did not know inhabited the Spring. The insects were drawn to the lights, and were both outside and inside the building... somebody left the doors open.

There were also a fair number of small (size 18 to 16) black and tan Caddisflies, but I didn't get any photos of them.

We all know that insects are drawn to lights, so this may be something that everybody out there already knows... and it certainly isn't a secret, but I felt that maybe I should share this idea. Of course, if your accommodations on the river are a little fancier than a campground with a lighted outhouse, you could probably spend a little time on the porch of the lodge and obtain similar results. If you don't get to routinely sample the hatches on a particular stream, it might give you some ideas about what to expect. On a river like the Spring (and others in Arkansas) hatches are sparse (and never heavy), and it's difficult to learn much from watching what's flying around the river.

I know I'll be adding a few new mayfly emergers and Salmonfly nymph patterns to my Spring River arsenal.


Not all that interesting from a fly fishing perspective, but pretty awesome for two Lepidoptera loving naturalists.

I still don't really understand why insects are drawn to the lights, but it sure makes it easy to find out what the fish are eating in the waters nearby.
Posted by Jay at 11:31 PM 10 comments