Attack of the Giant Woolly Buggers!


One of my most successful flies for bass has been a big twist on the ol' Woolly Bugger... actually not much different than the original... just a bit bigger. Both the hook and the chenille I use are larger than any I've seen used in other Woolly Buggers. The largest Bugger you are likely to find in a fly shop is usually a size 6... maybe a size 4. You just don't see them any bigger. You also can't buy the chenille I use in a fly shop, and unfortunately it may not be easy to find anymore. My neighborhood Michael's craft store no longer has any in stock. It was made by Lion Brand (a popular knitting and crochet yarn manufacturer), and from what I have learned from their website they have discontinued making chenille. The actual product was called Lion Suede chenille. I've got several hundred yards on hand so I should be okay for a while.

I've tied Giant Woolly Buggers in two basic color variations: rust and olive. The rust color was actually called "spice" by Lion Brand... not surprisingly the olive color was called "olive." I have found the rust color to be very useful in the Spring River (AR) where the trout and bass feed heavily on crayfish. The olive with black hackle and black marabou is true to the original Woolly Bugger pattern developed by Russel Blessing in 1967. Mr. Blessing originally tied his Woolly Buggers to imitate hellgrammites in order to catch Smallmouth Bass, but the pattern has grown far beyond its original intentions. I like to think that, by using the original color scheme to catch Smallies, I'm taking the Woolly Bugger back to its roots... although my approach might be slightly larger than the one Mr. Blessing originally took.

If you don't know what a hellgrammite is, perhaps you should check out the results of a Google image search. Even stranger than this aquatic larva is the adult of the same insect known as a Dobsonfly (Corydalus cornutus). The males have very exaggerated mandibles which are a sexually selected trait much like a bull Elk's antlers. They look very initimidating, but the adult males are actually quite harmless... although they've probably scared a few people into hurting themselves while trying to get away from such alien creatures. The adult males' mandibles are so exaggerated in size that they are useless for biting in defense. On the other hand, the hellgrammite larvae with much shorter (and far more functional) mandibles can inflict a painful bite. The adult female keeps the same short and powerful mandibles throughout her life cycle so she is always dangerous... you know you always have to be careful around the ladies. Their bite is not venomous, but they can do enough mechanical tissue damage to draw blood. (Remember, we're talking about Dobsonflies.)

Enough about insects... back to the flies... of the hand tied variety.

The Dobsonfly is a big insect, and the hellgrammite is an equally big larva. Mature hellgrammites can reach 9 cm in length (that's 3.5 inches). Based on the discrepancy between hellgrammite size and the average size 10 Woolly Bugger, I thought maybe a bigger bugger would be better. (Try saying that quickly ten times.) My Giant Woolly Buggers average about 3 inches... some a little less... some a little more... depending on how crazy I get with the marabou. 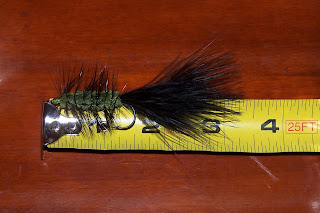 I tie these on size 1 Mustad 3262 hooks. If you look up the hook you will find that it is a light wire Aberdeen style hook- not typically used for fly tying. I like this hook for several reasons. First, it's lightweight. I have no trouble casting the finished fly with a 5 wt. Second, it's strong for an Aberdeen hook. I've gotten these flies hung on all sorts of structure and have never bent one open trying to jerk it free. Last, but not least, it's blued steel; I like the way it looks. I think it suits the original Woolly Bugger color scheme better than a bronze hook. I use UNI "Big Fly" thread in olive. I wrap a relatively short length of .025 lead free wire in the middle of the hook to add a small amount of weight and a little bulk. Without the wire weight the fluffy chenille tends to float the fly. The rest of the procedure is pretty standard bugger construction, but I do leave room for a big "buggy" head. I finish the head with a nice thick coat of Sally Hansen's "Hard as Nails" which I find to be better for big flies than traditional head cement. If you've never tried it, it's good stuff... and you can buy it at Walgreen's or Rite Aid. Here are sequential photos that I took of a Giant Woolly Bugger under contruction: 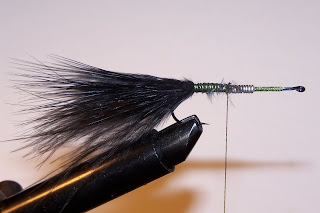 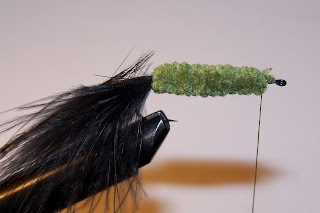 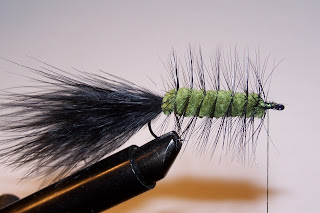 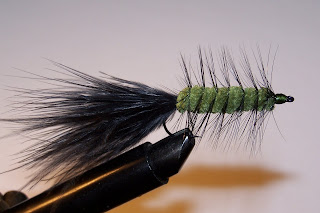 I often fish the Giant Woolly Bugger with a small split shot about 6 to 8 inches ahead of the fly. I prefer this method over heavily weighting the fly with wire wrap or a bead head. I think it leaves the fly with more freedom to produce that magical fish catching action.

The Woolly Bugger is an exceptional all around fly pattern in whatever size you choose to tie it. It can be used to approximate all sorts of prey items... maybe even a leech.... in giant form...